This month’s Gold Star Award goes to Carol Powell! Carol has demonstrated over the last few months that hard work can take you from no ability to walk, to now walking a few steps with a gutter frame and has proved that she is a long way of any form of plateau!! 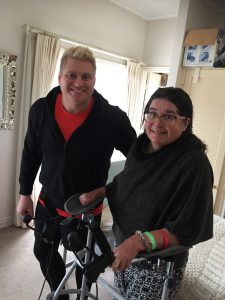 Carol Powell suffered a stroke while working in Papa New Guinea in May 2017. Following this she was then transferred to Queensland for treatment, and later transferred to Auckland Hospital. Initially following her stroke, she had no movement in her right upper limb and lower limb, severe dysphagia and required full assistance with all her personal cares and all her transfers using a hoist. Carol than received 8 months of rehabilitation and it was felt that she had reached her potential and was discharged home.

Since March 2019, Carol has been receiving input from our team twice a week at her home. On her initial assessment, Carol’s mobility with severely limited to needing two people to stand transfer her, she could only mobilise in a one-arm drive wheelchair and had serve and painful contractures in her right arm. .

During our time together, Carol and I have explored several different treatment modalities including but not limited to;

Carol is NOW transferring with moderate assistance of 1 person, standing with supervision and now able to take a few steps with a gutter frame and the assistance of 2 people.  Carol now also has passive movement in her right upper arm, allowing her to bring her arm onto the gutter frame.

Carol works exceptionally hard, both within the therapy sessions and with her own practice at home with her son Tom and carer Arnold. Carol is chasing down her goals to be as independent as possible with her transfers and ideally walk independently with a frame.

Well done Carol on your hard work and achievements. This is just the start of your success! 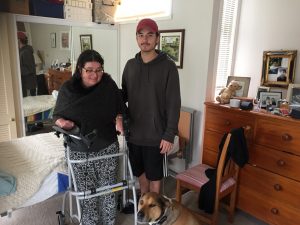 About the Author: Petrie Raddock