July’s Gold Star Award goes to Bernard this month for his achieving some fantastic changes in reducing the freezing of gait episodes he was experiencing.

Freezing of Gait – often referred to as FOG, commonly occurs when an individual is dual tasking. Dual tasking is when a person is processing environmental information, and/or cognitive information and still trying to move all at the same time. Bernard’s FOG episodes commonly happened when he was walking through a busy cafe, where he was trying to avoid tripping over people and chairs in a tight loud environment.

Bernard received an intensive burst of rehab that focused on large amplitude and high effort training, he was then extremely diligent with completing his home program 6 days a week for 8 weeks and then received another intensive burst of rehab which focused more on dual task training and high level balance work. On completion of Bernard’s second intensive burst of rehab he had made some pretty significant changes in his outcome measures! Most notably having increased his step length when walking, improved his leg strength and power, improved his high level balance and significantly reduced the amount of FOG episodes he was experiencing. Standardised outcome measures like the 10 metre walk test, mini best test and Freezing of Gait questionnaire were used pre and post treatment so we are able to keep track of the awesome progress that Bernard is making.

Bernard’s hard work and diligence completing his home programme has really paid off! Well done Bernard on your achievements! 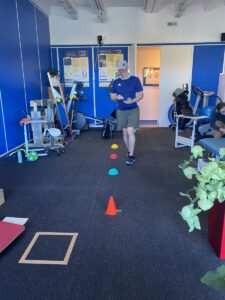