GOLD STAR AWARD – September 2019 Staying committed to what you love

The September GOLD STAR award goes to the inspiration Gabby, for continuing to purse inclusion in the sport that she loves, even following an acquired spinal cord injury. We have been working with Gabby for the past two and half years, she was a mad keen netball player before transverse myelitis damaged her spinal cord which left her as a T7 complete spinal cord injury. This took away Gabby’s ability to play netball, and surprisingly there is a real lack of wheelchair based netball. We often discussed life in a wheelchair and how there was still countless opportunities out there for her, she just had to dig a lot deeper than anyone before. 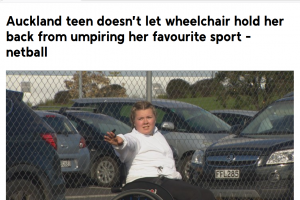 Gabby did dig! She has become the first in NZ but potentially world wide qualified Netball umpire who is in a wheelchair. Currently umpiring school level netball games her aspiration is to become an international level umpire………..and I am sure she will.

Watching the video clip below brought tears to my eyes, our role as neurological physiotherapists is not just about achieving physical change but also helping people regain some form of life and self identity separate to their neurological condition. We wish Gabby all the best with her umpiring career!!